BKED: An Editor to the (hard) Past

BKED: An Editor to the (hard) Past

BKED, shorts for Bách Khoa EDitor (Polytechnic Editor), is a word processor made by Doctor Quách Tuấn Ngọc first released in HE 11987. The story goes that after he went back from France in HE 11985, he saw the need of a program to help him making textbooks on programming for his fellow country. Having knowledge of developing on various platform such as DEC PDP-11, Intel SDK-80, Intel SDK-85 and Texas Instrument TMS-320, he went on to create BKED in x86 assembly and Pascal which can be run in graphics mode on a wide range of imported XT and AT clones with various type of cards form Hercules to EGA. The program was sold at the price of 1,500,000 VND which was absurd at the time. Nonetheless, it got sold pretty well with the biggest buyers being national ministries. He also sold around 120,000 copies of manual of the program. The program had helped the Ministry of Education finished report of a meeting right after it ends instead of waiting for about 5 days and moved away from making mimeographs for middle schooling graduation tests. The program felt into obscurity in the mid HE 11990s after the increasing adoption of Windows and Office combined with new IMEs for the platform such as Vietkey and Unikey.

On HE 12016-05-08, the author shared his copy of version 6.4 to the public. The Google Drive link seems to require Google account login so here is a reupload of the ZIP file uploaded there for anyone who despise anything Google related:

(Also it has been confirmed by the author that the source code of the program had been lost over time in one of his comments on his posts, which should make it a good target for decompilation 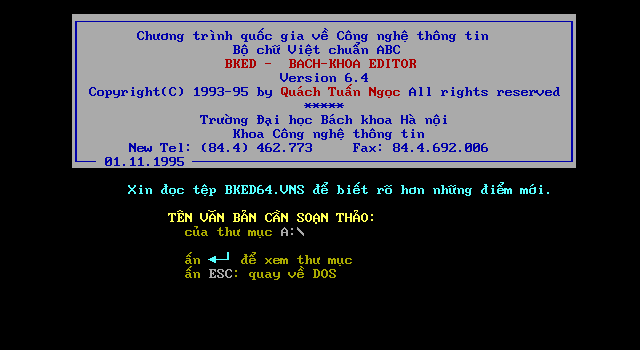 Upon launching the program, one is greeted with a splash screen to type in path of file to edit. The silver coloured box mostly tells about the program being a part of National Programme for Information Technology, supporting "ABC" character encoding which is a common name for VSCII and being made at the Information Technology faculty of Hanoi University of Science and Technology which is where the program name came from. Pressing Enter without typing anything gives you a menu to select the file instead. 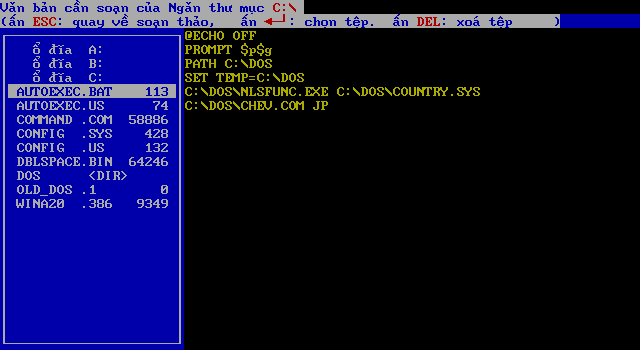 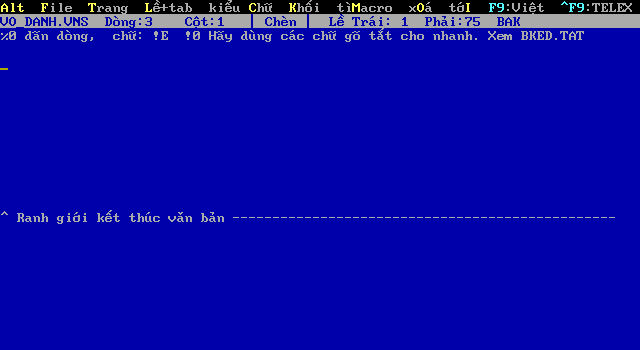 After choosing the file to edit (or in my case pressing Escape to create a new blank file) you are greeted with a default blue background white foreground pseudo-TUI with a horizon line at the bottom marking the end of the document. 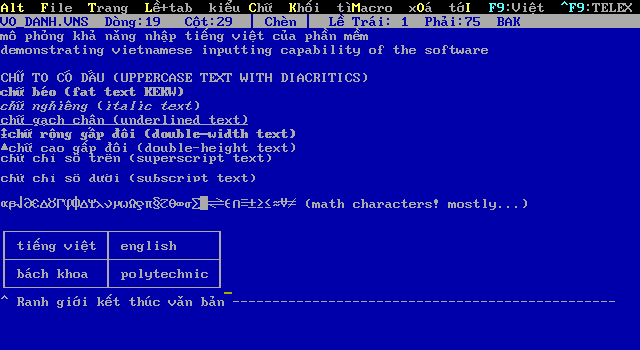 
The "UPPERCASE TEXT WITH DIACRITICS" formatting is interesting on its own. The VSCII character encoding standard defined 3 variants named VSCII-3 (commonly known under the name TCVN3 or simply as "ABC"), VSCII-2 and VSCII-1 with VSCII-2 being a superset of VSCII-3 and VSCII-1 being a superset of VSCII-2. While many European languages only need a couple precomposed characters to represent their languages, Vietnamese language requires 134 of such characters to cover all used combination of diacritics in both uppercase and lowercase which is not enough for the allocated extended ASCII codepoints. Therefore one could either violate ISO/IEC 2022 and replace some control codepoints with remaning unfit characters (as in VSCII-1), not bother with precomposed characters anymore and use a combining character encoding instead (as in Windows-1258) or (as in VSCII-3/TCVN3) input everything in lowercase and rely on programs handing such encoded text to use "uppercase fonts" on some part of the text instead

There are more Word-like features such as tab alignment, margins, macros and printing but without a proper manual (The file Huongdan.pdf in the ZIP is only a partial scan of table of context of the manual book and getting one of its copies nowadays here in the Southern area is probably impossible) I could not demonstrate properly how featureful the program is

Return to “Reviews and Retrospectives”